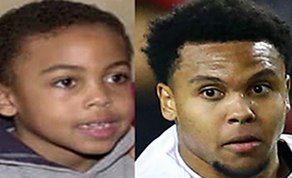 This work on Weston McKennie Biography presents you facts about his early life, net worth, family, childhood, personal life, parents, lifestyle and Girlfriend/wife.

Who was Weston McKennie before he became famous? Stay tuned as we walk you through his life story, beginning with his childhood. Buckle up for it is a long read that promises to be interesting.

Weston McKennie was born on the 28th day of August 1998. His birthplace is the city of Little Elm in the state of Texas, USA. his father’s name is John McKennie, while his mother’s name is Tina McKennie. See photos of his parents below.

Where did Weston McKennie grow up?

He spent three years in Texas where he grew up with his older brother and sister.

By the time McKennie was 6years old, his family moved to Kaiserslautern in Germany, after his dad (a serviceman) was being deployed to Ramstein Air Base.

Weston McKennie fell in love with football at six-year-old and became a member of the local club FC Phönix Otterbach in Germany.

He scored 8 goals during his first match and was later being promoted to play alongside the club’s eight-year-old. When the USMNT came to Kaiserslautern in 2016 for a friendly match against Poland, his parents ensured he took photos with legends, Landon Donovan and Carlos Bocanegra, a development that drew his awareness to the importance of football.

After his family went back to Texas, he tried merging American football and soccer but was unsuccessful. He later focused on just soccer, and in 2009 he became a member of vaunted FC Dallas Academy. Asides being successful in his club, he also ranked best in the youth national team of USA.

He spent seven years in FC Dallas youth academy, where he became one of the club’s best. During his last season, he won the Central Conference Player of the Year honours award.

Weston McKennie had to make his career decision when he was a 17-year-old. As a young promising footballer, he had so many offers coming in and had to decide. He had an offer from FC Dallas and was offered a full college scholarship from the University of Virginia.

He also had an offer from Bundesliga side Schalke who wanted to take him to Europe. The midfielder and his parent took a while in deliberating what was right for his future career, and it was decided that he should go with what Schalke was offering.

“The decision I made was the right one, although leaving FC Dallas was quite difficult for me, I don’t want to look back later after 10years and have regrets of not leaving Texas and going to Europe. and I had the belief that I can always come back to MLS and play at a high level. Going to Europe after being in MLS as a kid will be hard for me.”

The decision that Weston made turned out to be the best decision for him because he had an impressive start with the youth team of Schalke. On 20th May 2017, he made his first-team and developed himself to becoming a valuable asset to his team. Weston McKennie later became a midfielder at Juventus on a loan.

Whatever Weston touches turn to gold as he made history book on his arrival at the club as the first American player at Juventus and Serie A’s fifth. The Old Lady is one of Europe’s top clubs with stars like Cristiano Ronaldo and Paulo Dybala. There is every possibility that Weston is considering making his contract permanent. Whichever way things turn out to be for him in Italy, the rest will be history.

Mckennie is a friendly person, his personal qualities make him pass for a good friend. He is a jovial person, he parties hard; he loves cooking and loves learning new languages. Also, he is a fan of equity, dislikes injustice and once paid respect to the tragic George Floyd by wearing a ‘Justice for George’ armband. Also, he has no problems with giving details about his private and personal life.

Who is Weston McKennie Dating:

The footballer used to have a girlfriend. Her name is Laura Lyph. Mckennie and the blond beauty were inseparable until they broke up and they deleted their Instagram photos and memories they had together. In the meantime, the midfielder doesn’t seem to be someone that will get entangled soon.

Who Are Weston McKennie’s Parent and Siblings?

The midfielder’s father’s name is John McKennie. He was a serviceman, a staff sergeant. Mckennie is lucky to have this man as his father because he has always been a supportive father.

The midfielder’s beautiful mother’s name is Tina McKennie, she supports and makes important decisions for the family. It was Tina’s idea that the family to go to Germany instead of Alaska when her husband’s options for military station posting arrived. She is also the one who introduced the successful midfielder to the coach of FC Phönix Otterbach where he started his football journey.

Weston McKennie’s Net Worth and Lifestyle:

Playing in one of the top five leagues in the world makes Weston take home a cool salary, he earns 2.95 million euros annually and has an endorsement deal with Adidas. He is just 22 years old but has a net worth of  3 Million Euros and can afford everything money can buy e.g. cars, houses e.t.c.