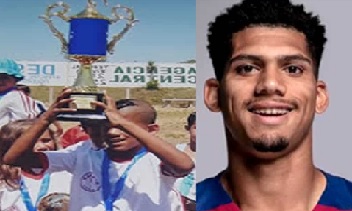 This work on Ronald Araujo Biography presents you facts about his early life, net worth, family, childhood, personal life, parents, lifestyle, and Girlfriend/wife.
Who was Ronald Araujo before he became famous? Stay tuned as we walk you through his life story, beginning with his childhood. Buckle up for it is a long read that promises to be interesting.

Ronald Araujo was born on the 7th-March-1999 in the country’s border city of Rivera, to Uruguayan parents. The player is the oldest of 3 children born to his parents. He inherited the humble trait of his father and his mother’s smile.
Ronald has his family roots in Uruguay, he also has a trace of  Brazilian family roots through his maternal ancestry. The player’s hometown (in the Mandubi neighborhood of Rivera) is just a few kilometers from the birthplace of Luis Suarez.

Where did Ronald Araujo grow up?

Ronald Araujo grew up in his hometown, the country’s border city of Rivera. He grew up alongside his two younger brothers. As the first child, he grew up with the responsibility of looking after his sibling. Ronald and his brothers spent more time with their mother as their father was often busy with work.

Ronald Araujo fell in love with football at age six, he also went to a free public school. Young Araujo had a strong desire for football that later made him neglect his academic pursuit. The young player got admitted into the academy where his mother sold fried cakes (doughnuts).
His mother sought her husband’s permission for her son to join the academy, after seeing kids in the school where she sold cakes. Thankfully, Araujo’s parents both agreed and enrolled him into the hometown club; Huracan de Rivera, where his mother sold fried cake.
Ronald’s expedition was inspired by legends like Carles Puyol and many other defenders who started out as a forward. From his show of talent, there is every reason to believe that the young defender was heading for success. These statements came as he led his academy to win a major trophy.

At age 9 Ronald Araujo went for bigger trials at his country’s capital Montevideo. Thou, he was unsuccessful in the attempt to join Atlético Peñarol. He came back home and continued playing for local teams. Due to the disappointment, he became depressed and saw himself as being a call away from a failed footballer.

After the failed trial, Araujo changed his position from attacker to midfielder. In the next ten years, the player advanced in his style of play and became a professional in football, in 2016, he went to Uruguay’s capital for trials- but this time he was successful with Atlético Rentistas.

Ronald Araujo met Sergio Cabrera at his new team, Sergio Cabrera was like a father figure to him and he also gave the young player a professional debut. At 16 years old his coach noticed he had the height and strength for a defender and he made him find solace as a center back.
Araújo’s defensive style attracted Club Atlético Boston River who signed him on the 28th-July-2017. Ronald became the youngest best defender in the highest pro football league in Uruguay and he attracted FC Barcelona scouts. The European visitors had so much faith in his capabilities and had him signed to the Spanish giant.
The defender left his hometown and his family to settle with the life in Barcelona’s B side. The defender became Blaugrana’s most priceless asset, his earning was raised to €100 million at Barca B with a potential increase to €200 if he reached the first team. With Samuel Umtiti becoming un-reliable, the club began to enjoy Araujo as the next major piece in Barcelona’s defense.

In October 2020 he made his debut for Barcelona’s senior team on a bad note. He was sent off-pitch for tackling Javier Hernandez just 13 minutes after he replaced Jean-Clair Todibo.

Ronald Araujo didn’t allow his debut experience to jinx the rest of his career. Ronald Koeman gave the defender the number 4 jersey as he joined Barcelona’s main squad for the 2020-21 season a few months after the debut experience.

The defender didn’t allow the experience nor his family background to hinder him from becoming a great footballer, in 2021, the player won the January 2021 LaLiga Goal of the Month.

Ronald Araujo is indeed one of the greatest defenders. On the pitch, his domineering presence is a sight to behold. Uruguay is indeed blessed to finally have the successor of Diego Godín.

Ronald Araujo has a distinctive personality off-pitch, he is a gentle footballer with a beautiful smile. Araujo’s humility precedes his reputation. He is someone who enjoys taking a walk with nature.

The media tag him as the humble center-back – one whom Madrid couldn’t steal. The player’s humble beginning is the reason behind his exploit in football. Ronald never forgets Rivera, where his family comes from.

Who is Ronald Araujo Girlfriend/Wife To be?

There were some speculations about a lady (Abi Oliivera) who Ronald posted on his Instagram page to be his girlfriend, but it was later found that she is just a part of the footballer’s family.

Judging by their show of public display of affection, there is a  chance that she would be his wife and mother of his children.

Who Are Ronald Araujo Parents and Siblings?

Ronald Araujo has a father who has supported him both financially and morally throughout his career. His father is a humble man And also a comptroller general. He always encourages his son to put God first before any other thing. Perhaps the defender’s religious ideas are from his father.
Ronald Araujo’s mother is a superwoman, she raised three boys alongside her work. She Puts her children’s future before her reputation. Recall, Ronald Araujo’s mom sold fried cakes to support her family. She supports her family and also brings ideas to make the family grow, Even in his childhood days, his mother in her wisdom came up with the suggestion of him joining the youth academy. Thankfully, her idea has turned her boy into a millionaire.

Ronald has two siblings (both boys), and he is the oldest of three children born to his parents. The middle brother’s name is Maikela, he is also a footballer and he is tag the next footballer of the family. Maikela is already making waves in youth soccer with a local club.

We were not able to get information about his last brother, but our guess is he is also as supportive as the rest of the family.

Ronald Araujo Net Worth and Lifestyle:

At the time of writing Ronald Araujo’s biography, his net worth is estimated to be around €1 million, With his annual Salary of €2.9 million (2021 Stats). The player owns an exotic car and an expensive apartment, where he lives with his girlfriend.

Ronald loves catching fun while playing football with his girlfriend. He also loves taking his entire family to cool off on scorching afternoons.

Thanks for reading this article on Ronald Araujo Biography. At Sportliva, we appreciate your comments on your perception of our articles as we strive to revolutionize the bio-space. We believe you now know much about Ronald Araujo biography especially as it relates to his early life, net worth, family, childhood, personal life, parents, lifestyle, and Girlfriend/wife. Ronald Araujo biography is not the only article in our bio section. Consider reading Dominic Szoboszlai biography.
Share
Facebook
Twitter
Pinterest
WhatsApp
Previous articleDominik Szoboszlai Biography
Next articleHakan Calhanoglu Biography