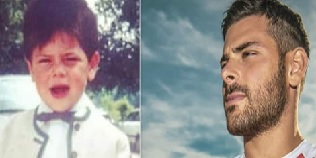 sportshttp://sportliva.com
This work on Kevin Volland Biography presents you facts about his early life, net worth, family, childhood, personal life, parents, lifestyle, and Girlfriend/wife.
Who was Kevin Volland before he became famous? Stay tuned as we walk you through his life story, beginning with his childhood. Buckle up for it is a long read that promises to be interesting.

Kevin Volland has his family roots in Marktoberdorf, in Germany. The city which has a population of 18,725, is famed for computer science education. In addition, it plays host to the International Chamber Choir Competition – a famous religious gathering. Below is a photo of his parents.

Where did Kevin Volland grow up?

Kevin Volland grew alongside his younger brother (Robin Volland) and sister (Jenny Volland), in the city of Marktoberdorf in Germany. As the first child of his parents, he grew with the responsibility of taking care of his younger ones.

Young Kevin grew up a happy child, as he had memorable memories with his family, most especially his younger brother.

Kevin Volland fell in love with football at a young age alongside his younger brother Robin. The duo used to test their football skills at FC Thalhofen, a Sports complex in Marktoberdorf, not far from their family home.

The two brothers tried merging hockey together with football, but later continued on just the path of football.

After laying the foundation of his career, Kevin later joined Minich-based FC Memmingen (amateur division),  in 2005 when he was just 12 years old. Unfortunately, his club was relegated to the Bavarian League, but luckily for him, bigger teams in higher division wanted him.
After the relegation in 2006 Kevin moved to TSG Thannhausen, the young footballer was passionate and hardworking and it paid off with him moving to 1860 Munich. His parent saw to it that he stayed in the club’s hostel which made him more focused on his career.

Kevin’s parents made the right decision by making him stay at the club’s hostel because he became really focused and hardworking. At 17 years, national team scouts began praising him due to his performance.

Kevin got called to make his debut in German U17 colors, the player scored 13 goals before joining TSV 1860 Munich. After scoring 20 goals in a few appearances, Kevin became a hit in the German second division (2nd Bundesliga) and also became the club’s captain. He went on to sign a contract with Bundesliga side – TSG 1899 Hoffenheim In January 2011 and improved his goal-scoring form with 33 goals in fewer appearances.

Kevin Volland made history book as the fastest goalscorer in Bundesliga history (nine seconds), At 1899 Hoffenheim against Pep Guardiola’s Bayern Munich. The player claimed the UEFA European Under-21 Championship Silver Boot that same year. He also went on to make a name in the UEFA U21 team of the tournament.
Kevin joined Bayer Leverkusen On the 20th-May-2016, where he became a legend and a professional in football. he formed a formidable partnership which the club’s star-boy (Kai Havertz) – scoring 44 goals in 115 matches.
During the 2020/2021 summer transfer window, Volland left Germany his home and signed a contract with Monaco until 2024. At the time of writing his biography, the German’s partnership with Wissam Ben Yedder has produced 10 goals with 6 assists (in just 19 matches) to his name. He is indeed a gift to his country and family.

Kevin Volland has a calm, cool personality off-pitch, the footballer is a simple and humble person who embraces contentment. His handsomeness always gives him away.

Kevin is also a selfless person who is always willing to help others in need, he was spotted in a local German radio station engaging with children under the rainbow in a fundraising campaign.

Who is Kevin Volland Girlfriend/Wife To be?

Kevin Volland started dating his girlfriend (Katja Fitchl) at the age of 17, although the lovebirds are of the same age. below is a photo of the player and his beautiful wife.

They started building their relationship in Germany on the 5th day of January 2009, at a cinema in Füssen.

8 years into their relationships the love birds had their civil wedding with the blessing of their parents. The church wedding followed on the 4th-June-2017 on a Pentecost Sunday and the celebration took place in Gauklerhof Allgau, waltenhofen Germany.

Their union was blessed with a beautiful daughter on the 18th-March 2018 named Emilia Volland.

see pictures below of the player and his beautiful wife.

Who Are Kevin Volland Parents and Siblings?

Kevin Volland’s father’s name is Andreas Volland who was born on 19 February 1965 (56 years old), he is a retired hockey player. Andreas started his career as a striker in Germany with EV Pfronten, an ice hockey club in Pfronten. In 1993 he played at the World Cup for Germany, achieving three scorer points in six games.

In 2004 the hockey legend retired with EV Pfronten. He has always been a supportive father to the player,  despite the player switching from hockey to football, he still makes out time to play hockey with his father.

On the other hand, the player’s mother’s name is Anita Volland. The mother of three has a strong relationship with her first child, Kevin. While her husband was busy with his hockey career, his mother managed and supported his football career.

Like we said earlier,  the footballer has two younger ones, a brother (Robin) and a sister (Jenny).
Robin was born in the year 1994, two years younger than his brother. He also had a passion for hockey and started his career in the sport before switching to football just like his older brother. However, he didn’t become a professional. Robin had other passions while growing up, he is creative and loved drawing as a child.

Robin went into ICT training in a Munich school. He studied network administration before specializing in graphic design and filmography.  Robin is also supportive of his older brother, despite the fact that he lives in the shadow of Kevin’s fame, he stills goes to watch him play.

Jenny is the youngest among the three born to the Volland family. she was born in the year 1996, unlike her older brother Robin, no much information was given on social media about her, but from what we could gather, she might likely be married, see photos below of her and her baby.

Kevin Volland Net Worth and Lifestyle:

In 2010 Kevin Volland’s had a rise in his fortune with his salary of €5,208,000 per year in Monaco, his net worth at this point was estimated to be 15 Million Euros. The player was also managed by German-based ISMG International Sports.

The footballer lives a luxurious lifestyle. Among his fleet of cars, his favorite car is an Audi R8. It costs between $195,900 to $208,100. The player also gave his fans a peep at his mansion and his designer’s cloth. The footballer is indeed living a life fit for a king.

Thanks for reading this article on Kevin Volland Biography. At Sportliva, we appreciate your comments on your perception of our articles as we strive to revolutionize the bio-space. We believe you now know much about Kevin Volland biography, early life, net worth, family, childhood, personal life, parents, lifestyle, and Girlfriend/wife. Kevin Volland biography is not the only article in our bio section. Consider reading Joshua Zirkzee‘s biography.
Post Views: 231
Share
Facebook
Twitter
Pinterest
WhatsApp
Previous articleJoshua Zirkzee Biography
Next articleDominik Szoboszlai Biography
- Advertisement -

The Greatest African-American Baseball Players Of All Time – Sportliva