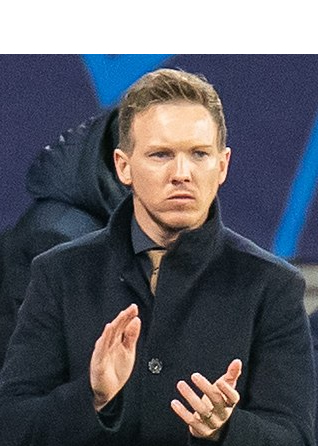 Who is the young German Manager that saw Rb Leipzig to the semi-finals of the UEFA Champions League? Behold Julian Nagelsmann Biography. It is a collection of facts detailing his childhood, parents, love life, family, lifestyle and net worth.

In addition, we will walk you through facts about Julian Nagelsmann’s career trajectory, turning point and breakthrough. While you are at it, please note that Julian Nagelsmann biography is not the only article in our bio section. Check our archives for interesting bios of your favourite Managers. Without further Dilly Dally, behold Julian Nagelsmann life story.

The German coach is a one-time centre back. He is the youngest manager in the history of the Champions League to take charge of a semi-final match. Nagelsmann grew up at Landsberg am Lech in Germany and had years of career buildup with 1860 Munich and FC Augsburg. He had childhood dreams of making it to professional football. However, they were shattered as he suffered a serious injury while playing for the reserves of FC Augsburg.

He ventured into management with 1899 Hoffenheim and helped the club escape relegation during his first year in charge. The budding manager also saw the club to a historic Champions League qualification before leaving at the end of the 2018–19 season. His good run of management continued at RB Leipzig, where he has made the club a standout team in the Bundesliga. Although Nagelsmann is still very young in management, he has made a name for himself and looks to achieve more.

The manager was born on 23 July 1987 at the town of Landsberg am Lech, Germany. He was named Julian Nagelsmann by his father Erwin and a little-known mother. Nagelsmann is Bavarian by ethnicity and grew up in his birth town, which is just 35 kilometres South of Ausburg.

Nagelsmann fell in love with football as a kid and had dreams of becoming a professional footballer in German top-flight Bundesliga. His dream was feasible, visible and achievable. Hope like they say springs eternal, and Nagelsmann had reasons to be optimistic about an auspicious future for himself in the sport.

When the then centre back was halfway through his youth career with 1860 Munich, he was certain that there was nothing standing in between him and his dreams. More so, he had teammates like Christian Träsch and Fabian Johnson. The duo were ambitious like Nagelsmann and travelled on the fast lane to play in the Bundesliga.

Unfortunately, Nagelsmann sustained a serious injury shortly after joining Ausburg. It was specifically cruciate ligament damage. The setback saw him spent sleepless nights wrestling with the decision to prematurely end his playing career.

“My dream of becoming a professional broke, and it hurt,” he revealed many years later. “It was sad for me to see my career end when I was still very young and had my life ahead of me.”

Seemingly drifting away from football, Nagelsmann began studying business science. He passed his mid-term exams and was offered a job at BMW in the sales department. However, he took up the job of a scout for Thomas Tuchel at Augsburg II where his contract was still running.

While Nagelsmann was at it, he still hadn’t made up his mind about becoming a manager. It wasn’t until the then-coach Thomas Tuchel talked him into coaching that he decided to venture into it.

1860 Munich soon came offering the German the opportunity to work as their under-17 assistant. The then 21-year-old knew his chance had come and gird up his loins for the task ahead. Nagelsmann experience with 1860 Munich made him believe that he will fare well in coaching.

It also informed his resolve to study sports science to better understand how to manage the medical department of his job. Also, he got enrolled in the famous Hennes-Weisweiler Academy in Cologne where he sought to get a professional license in coaching.

Nagelsmann soon became the assistant coach of Hoffenheim’s U17s before taking full charge of the team. He progressed to lead the club’s U19s to the Bundesliga championship and was made first-team manager ahead of the 2016-17 campaign.

With the appointment, Nagelsmann became the youngest manager in Bundesliga history. When he took over Hoffenheim, they were 17th on the table and much likely to suffer relegation. However, they impressively finished a point above the relegation playoff spot.

Riding on the tide of their good run, the club finished 4th in the table during the 2016–17 Bundesliga season. With the finish came Hoffenheim’s first-ever qualification for the  Champions League. Nagelsmann joined RB Leipzig in 2019 and added more records to his impressive managerial career.

He first became the youngest coach in history to win a Champions League knockout tie by leading RB Leipzig to defeat Tottenham Hotspur 4-0 in the tournament. Not long after, Nagelsmann led Leipzig to their first-ever semi-final. It is interesting to note that Nagelsmann’s exploits have only begun and his story is far from being over. His best is yet to come, and the process would surely make headlines.

The coach has an engaging life away from his profession and believes there to there is more to life than football. “I am very passionate about football, and about coaching. However, it’s not everything to me. I love it, but it is not life or death,” Nagelsmann told Melissa Reddy of JOE.

The coach is big on skateboarding. Added to his hobbies are skiing, para-gliding, and mountain biking. He is also training to become a light aircraft pilot. Above all, his interpersonal skills are top notch and he possesses a personality full of smiles that make people want to associate with him.

Who is Julian Nagelsmann wife?

Pieces of information existing on reputable web articles indicate that the coach is in a marital relationship. Julian Nagelsmann’s wife goes by the name Varena. They have been couples for at least 5 years and have a son together known as Maximilian.

Speaking to German newspaper Bild about how helpful his wife and kids have been to him, Nagelsmann said: “It helps a lot when you come home at night and you’ve got a partner and a son. My wife Varena supports me a lot so I can focus on my job.”

About Julian Nagelsmann Parents and Siblings

The Coach’s father Erwin suddenly passed away when he was only 20 years old. It was the same period that Nagelsmann got a career-threatening injury and was contemplating hanging his boots.

The coach has an older brother and elder sister who were far away from home at the time of their father’s death. As such, he had to bear the responsibility of dealing with insurances as well as selling his dad’s car and house.

Julian Nagelsmann Net Worth and Lifestyle

It is an open secret that outrageous money goes into football. Thus, Julian Nagelsmann’s net worth could be about $5 million, even though he isn’t a decade old in football management.

He has exotic cars in the garage of his expensive house but prefers skating home which is just 7 kilometres from Rb Leipzig training ground. The coach’s status as a young manager makes him a soft target for sponsorship and endorsements deals which are secondary sources of his wealth.

Fact 1: The young coach is a training ground innovator for one good reason. It is no other but the installation of a huge video wall at Rb Leipzig training facility. The wall which receives feeds from cameras at strategic corners of the stadium gives players a better tactical overview of the game.

Fact 2: You won’t find Nagelsmann on any social media platform because he gave up on them. More so, his agent Marc Kosiscke thinks managers don’t need social media.

Fact 3: In October 2017, Nagelsmann became the first head coach in world football to sign the Common Goal initiative. The charitable project sees footballers pledge at least one percent of their wages to a collective fund. The project’s management is overseen by Berlin-based non-governmental organization streetfootballworld.

Fact 4: Christiano Ronaldo and Lionel Messi were older than the 33 year RB Leipzig coach when he led his team to the semi-finals of the 2019/2020 Champions League. He is also younger than 63 players that took part in the tournament.

Fact 5: They gave his nickname Baby Mourinho to him by former professional goalkeeper Tim Wiese during his time as assistant coach of 1899 Hoffenheim. However, Nagelsmann has proven to be his own man as his Rb Leipzig beat Mourinho’s Tottenham 4-0 in their champion’s league face off.

That does it for Julian Nagelsmann’s biography. We hope you found it as an interesting read. If you see anything that doesn’t look right, please let us know by leaving a comment. Looking for more factual stories like Julian Nagelsmann biography? Consider reading Ronald Koeman Biography.