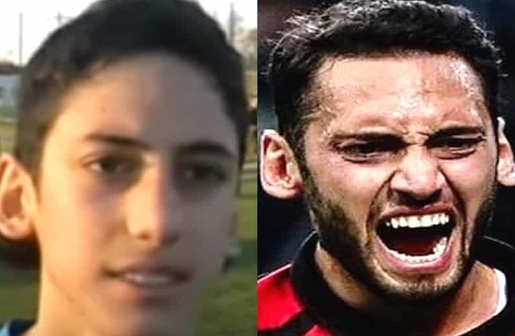 This work on Hakan Calhanoglu Biography presents you facts about his early life, net worth, family, childhood, personal life, parents, lifestyle, and Girlfriend/wife.
Who was Hakan Calhanoglu before he became famous? Stay tuned as we walk you through his life story, beginning with his childhood. Buckle up for it is a long read that promises to be interesting.

Hakan Calhanoglu was born 8th-February-1994 in the city of Mannheim, Germany to the family of Mr. and Mrs. Calhanoglu. He is the oldest of two children born to his parents. Below is a photo of his parents.

The player has his family roots in Konursu village of Bayburt, Turkey. As of 2010, his hometown had an estimated population of about 1,573 people.

Where did Hakan Calhanoglu grow up?

Hakan Calhanoglu grew up in the streets of Mannheim alongside his younger brother. The young brother fell in love with football at a young age, and they got permission to play street football with their friends because of the love their father has for football.

Like most footballers, Calhanoglu fell in love at a young age, and his father him at a local institute when he was 7 years old. The young player’s parents believed in their son and they did everything to ensure he became a professional footballer, his parents made him join Waldhof Mannheim academy.

Although, the midfielder had a hard time understanding the directive of his trainers and he worked hard to improve his football skills and make his family proud. The midfielder joined the youth team of Karsruher SC after spending eight years at Waldhof.
Calhanoglu started gaining traction in soccer at his new team and he was called on different occasions to play for his country. The midfielder looked up to Mesut Ozil and he did as much as he can to be great at playing football.
The player moved to Hamburger SV with his parent’s support in 2013. Although the players spend much time at the German club, he dared to exhibit traits of Cristiano Ronaldo in taking free-kicks at Hamburger.

Hakan Calhanoglu moved to Bayer Leverkusen in 2014, the midfielder ensured that the €14.5 million invested in acquiring him was not a waste, so he worked harder and began scoring goals when he was just 20-years-old.

In 2017, Calhanoglu joined AC Milan and he had a four-year contract worth €24 million with the Italian club. This move for him made his parent proud and his mother consistently bragged about his progress in football.
The midfielder was given the number 10 jersey, which made his fans expect extraordinary performance from him.  Sadly, Calhanoglu was not able to meet up to what of expected of him but he did all he could to be better than he was.

Fortunately, Calhanoglu’s improvement in his football skills made him the topic of many football analysts. The midfielder also made history when he assisted Rafael Leao who scored the fastest goal in Serie A on 21st December 2020.  Rafael Leao scored the goal precisely 6.2 seconds on the clock, and it was recorded as the quickest goal ever scored in Europe’s top five leagues.

After assisting Rafael in scoring the fastest goal, many clubs came after the young midfielder with the intention of signing him. Hopefully, the midfielder will end up joining Juventus in 2021. Indeed his hard work has paid off.

Hakan Calhanoglu has a distinctive personality off-pitch just as most footballers. The midfielder has a gentle, honest, and instinctive personality. Occasionally the player indulges in child’s-play just to relieve stress and catch-up on lost time with friends.

Calhanoglu is the life of every party and there is no dull moment with him, the player also has musical talent (DJ). But most importantly the player loves to spend free time with family and friends.

Who is Hakan Calhanoglu Girlfriend/Wife To be?

Calhanoglu fell in love and married his childhood girlfriend, Sinem Gundogdu at Mannheim in 2017.

Sadly their love story went south as his wife accused him of flirting with another woman. Thus, their marriage was on the verge of a divorce. Fortunately, in 2018 the couple reconciled and had their first baby name Liya. At the time of writing this article, the player is expecting his second child.

“We are expecting another miracle in my family, and our Liya will soon become a big sister to our unborn child.”

Who Are Hakan Calhanoglu Parents and Siblings?

On the other hand, his mother’s name is Naime Calhanoglu. His mother is an educated and caring mother who put her children’s welfare first before her comfort. Below is a photo of the midfielder’s mother.

The midfielder has a brother whose name is Muhammed Calhanoglu. His brother took after d footsteps to becoming a football just like him and his father. Muhammed is also a midfielder and he also went to the same youth academy (Waldhof and Karlsruher SC) as his elder brother.
Although Muhammed has not yet established himself in the upper echelons of international football, he still works hard to actualize his dreams.

Hakan Calhanoglu Net Worth and Lifestyle:

In 2021 the estimated Net Worth of Hakan Calhanoglu is €9.9 million. He earns €2.5 million annually at AC Milan. The midfielder who grew up in Mannheim now lives a luxurious lifestyle.
The player was able to get himself flashy cars and a beautiful house due to his earning and he also travels with his family on an expensive private jet.

Thanks for reading this article on Hakan Calhanoglu Biography. At Sportliva, we appreciate your comments on your perception of our articles as we strive to revolutionize the bio-space. We believe you now know much about Hakan Calhanoglu biography as it relates to his early life, net worth, family, childhood, personal life, parents, lifestyle, and Girlfriend/wife. Hakan Calhanoglu biography is not the only article in our bio section. Consider reading Ronald Araujo biography.
Share
Facebook
Twitter
Pinterest
WhatsApp
Previous articleRonald Araujo Biography
Next articleOzan Kabak Biography