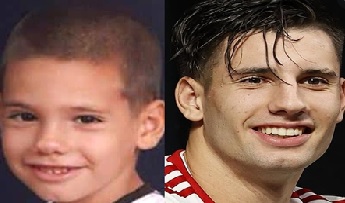 sportshttp://sportliva.com
This work on Dominik Szoboszlai Biography presents you facts about his early life, net worth, family, childhood, personal life, parents, lifestyle, and Girlfriend/wife.
Who was Dominik Szoboszlai before he became famous? Stay tuned as we walk you through his life story, beginning with his childhood. Buckle up for it is a long read that promises to be interesting.

Dominik Szoboszlai was born on the 25th-October-2000, at Szekesfehervar, Hungary. He was born to his parents Mr. Zsolt Szoboszlai and Mrs. Zsanet Nemeth. He is the oldest of 2 children born of his parents.
The player has his family roots from Szekesfehervar, which is the ninth-largest city in Hungary. His hometown is one of the oldest cities in Hungary, it date as far back as the 5th century BC.

There are no doubts that the footballer took after the beauty of his mother, below is the photo of his parents.

Where did Dominik Szoboszlai grow up?

Dominik Szoboszlai grew up in Szekesfehervar with his parent before his little sister came along.
The midfielder had a happy childhood, having a one-time footballer for a dad was an advantage to him because he learned and loved football from his father. Unlike other kids his age, Szoboszlai loves playing football. The midfielder has a dream of becoming better than his father in football, indeed, Szoboszlai is on his way to fulfilling the dreams.

Dominik Szoboszlai started football at an early age. His parents enrolled him at Videoton (football academy) at age six. His father who had experience in football gave the young midfielder extra football lessons. Barely a year after the young player joined the football academy, his father started up a new sports institute, which he named Akademie Fonix Gold FC.

“My father is the major factor in me becoming a professional, his continuous drilling and advice are what made a difference in my football career.”

Dominik Szoboszlai spent eight years of training under his father at Fonix Gold, fortunately, it gave him the privilege of exploring other professional clubs. In 2011, the midfielder was on loan with Ujpest.
Interestingly, Szoboszlai became more of a professional before joining MTK Budapest in 2015.
The midfielder showed so much talent at MKT, that made FC Liefering came seeking to have him on their team. Thereafter, Szoboszlai joined Liefering’s youth team in 2016, the youth team is located in Austria.
Although Joining Salzburg’s second team (Liefering) didn’t give the midfielder the fast success he wanted. However, he continued being a professional and rose amongst the ranks of Liefering. Unfortunately, the midfielder had an injury that delayed him from reaching the peak of his career.

In 2018, the midfielder joined Salzburg under the management of Marco Rose when he was just 17 years old. Szoboszlai formed a formidable attacking trident with Haaland and Takumi Minamino. In 2020, the midfielder was ranked amongst the 30 best young players. Szoboszlai took no time in adapting to the new club and teammate.

There were times when the midfielder felt like he wasn’t being as professional as expected of him, he worked harder and became better.  As sportskeeda.com explains; it was at the Austrian club that Szoboszlai realized he needed to become more hardworking than before in his career.

Dominik Szoboszlai made his club and country proud of him. In 2019, the midfielder faced world-class icons like Luka Modric and Ivan Rakitic, in Hungary’s match against Croatia. In fact, he helped his country secure a 2-1 victory by showing maturity and playing like a professional.

Szoboszlai helped Salzburg cling onto three Austrian Bundesliga titles. His show of talent made top clubs like AC Milan, PSG, Real Madrid, and Leipzig want to sign him. The midfielder’s career life took a different turn as he started to win so many trophies for his club.
In January 2021, the midfielder signed a four-and-a-half-year contract worth €20 million with RB Leipzig. Whichever way his career life takes, the rest, as they say, will be history.

Dominik Szoboszlai has a distinctive personality off-pitch, the midfielder is chatty, sociable, and draws energy from crowds. There is no dull moment with the player because he is cheerful and assertive in social gatherings. Dominik is good at other things and not just in football, the midfielder loves snowboarding with friends and he also loves cooking and playing video games. Most importantly, he loves spending time with his family and friends.

Who is Dominik Szoboszlai Girlfriend/Wife To be?

Dominik Szoboszlai has been in about two relationships. First, in 2019 he dated Kata (III) but it ended badly as the relationship didn’t last more than three months after it started.

Luckily, the midfielder met his new girlfriend (Fanni Gecsek) at the end of 2020. The midfielder had got himself a supportive girlfriend, she usually accompanies him on several international trips and is always cheering him on, from the sideline in every one of his games. Our guess is, she might become his future wife and mother of his unborn kids.

Who Are Dominik Szoboszlai Parents and Siblings?

Dominik Szoboszlai’s father is Zsolt Szoboszlai, he is a one time professional footballer. His passion for football never died after his career ended instead he channeled it into coaching the young midfielder, and he made a professional out of his son.

After Dominik’s father and some other players were dismissed from Videoton institute, they created a youth academy named Foenix-Gold FC. Zsolt Szoboszlai oversaw his son’s youth development at his new sports center. His father is the greatest motivation that has influenced him.

On the other hand, his mother is Zsanet Nemeth. His mother’s love and care are one of the driving forces that have helped him through his young days in football and also his latest football pursuits. Our guess is that his mother prefers to support her son in the background.

The player has just a little sister, he usually posts photos of her on his Instagram page. Thou the age difference between the two of them is quite much, he always loves showing how much he loves her. Below is a photo of the midfielder and his little sister.

Dominik Szoboszlai Net Worth and Lifestyle:

At the time of writing Dominik Szoboszlai’s biography, his Net Worth is estimated to be the sum of €4.5 million (2021 Stats). The player earns €3 million annually at Salzburg. Although the midfielder is no fan of a luxurious lifestyle, the car that was gifted to him by Salzburg is what he uses for most of his movements.

Thanks for reading this article on Dominik Szoboszlai Biography. At Sportliva, we appreciate your comments on your perception of our articles as we strive to revolutionize the bio-space. We believe you now know much about Dominik Szoboszlai biography as it relates to his early life, net worth, family, childhood, personal life, parents, lifestyle, and Girlfriend/wife. Dominik Szoboszlai biography is not the only article in our bio section. Consider reading Kevin Volland’s biography.
Post Views: 168
Share
Facebook
Twitter
Pinterest
WhatsApp
Previous articleKevin Volland Biography
Next articleRonald Araujo Biography
- Advertisement -

2022 NFL Mock Draft: A Fourth QB Goes In The First Round – Sportliva