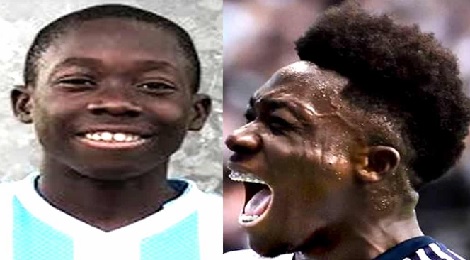 This work on Alphonso Davies Biography presents you facts about his early life, net worth, family, childhood, personal life, parents, lifestyle, and Girlfriend/wife.

Who was Alphonso Davies before he became famous? Stay tuned as we walk you through his life story, beginning with his childhood. Buckle up for it is a long read that promises to be interesting.

Alphonso Boyle Davies was born on the 2nd day of November 2000. His birthplace is the popular Buduburam refugee camp in Ghana. The name of his parents are Debeah (father) and Victoria (mother).

Where Did Alphonso Davies Grow Up:

The football genius grew up in a refugee camp near Accra in Ghana. His parents are originally Liberians. They fled the country when a civil war broke out and found sanctuary in Ghana. By the time the left-back was 5 years old, his parents embraced an offer to migrate to Canada. It was in Canada that life got started for Davies. He began playing football with peers at Mother Theresa Catholic school in the city of Edmonton.

The left began a proper career Buildup in football with local club Nicholas Academy. He went on to have an 8-year Buildup with Edmonton Strikers before joining Vancouver Whitecaps FC’s. It was with the club that Davies became the first youngest player to sign a USL contract at 15 years, 3 months in 2016.

Upon making his first-team debut for the club in 2016, Davies resolved that he would achieve great things with the club before leaving. To that end, he worked hard to become the club’s Player of the Year 2018 and also received the whitecaps’ Goal of the Year award.

It wasn’t long before Davies moved to Europe in January 2019 and began a new season by playing for German giants Bayern Munich. He joined the team club for a record fee of 9.84m fee in 2018. It is worthwhile to note that Davies has been faring pretty well at Bayern Munich ever since he arrived at the club and has won major titles with them including the 2020 champions league.

The left-back is a perfect definition of a gentleman. He possesses every quality you wish in a friend and has a great personality that endears him to many. What’s more, he knows the perfect to say and is highly emotionally intelligent.

Who is Alphonso Davies Dating?

Davies is the kind of defender that wins both on and off-field. The name of his beautiful girlfriend is Jordyn Huitema. She is Canadian and has been with the left-back for years. Interesting she is also a soccer player.

Little wonder Davies and Huitema are referred to as Power Soccer couples by the press. The lovebirds make out time for each other away from their busy schedules.

About Alphonso Davies Parents and Siblings:

Like we earlier mentioned, the name of the left-back’s parents are Debeah and Victoria. Davies’s success is a function of the work they put in to ensure that he became who he is today. Kudos to them for making the right decisions for his future. Regarding his siblings, the left-back has a younger sister and brother. The name of his sister is Ruth. Not much is known about his brother.

Alphonso Davies Net Worth and Lifestyle:

Let’s talk about how the left-back makes and spends his money. Do you know that he has a net worth of $1 million? It’s an open secret that he made that much money from endorsements and playing top-flight football. Thus, it is expected that he lives in a posh house that has numerous garages for his exotic cars.

Thanks for reading this article on Alphonso Davies Biography. At Sportliva, we appreciate your comments on your perception of our articles as we strive to revolutionize the bio-space. We believe you now know much about Alphonso Davies’s biography, especially as it relates to his early life, net worth, family, childhood, personal life, parents, lifestyle, and Girlfriend/wife. Remember, Alphonso Davies’s biography is not the only article in our bio section. Consider reading Andre Onana Biography.