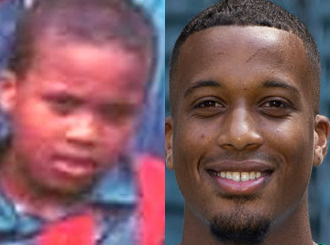 This work on Alassane Plea Biography presents you facts about his early life, net worth, family, childhood, personal life, parents, lifestyle and Girlfriend/wife.

Who was Alassane Plea before he became famous? Stay tuned as we walk you through his life story, beginning with his childhood. Buckle up for it is a long read that promises to be interesting.

Let’s start with when and where he was born. Alassane Alexandre Plea was born on the 10th day of March 1993. His birthplace is the city of Lille in France. See Photos of his father Sekou and French mother below.

Where Did Alassane Plea Grow up?

He grew up in Lille without any siblings. Growing up in the town, Plea was exposed to violence and drug. However, he didn’t partake in any of the immoralities, thanks to his early interests in football.

As a kid, Plea loved watching football games on TV and developed a liking for Zinedine Zidane and Ronaldo during UEFA Euro 2000 and the 2002 FIFA World Cup.

When the striker was 8 years old, scouts from local club US Ascq saw him playing football and immediately brought him in. They gave Plea the number 10 Jersey and in that manner, helped him begin his career in football.

Upon spending about 5 years in Ascq, Plea moved to ES Wasquehal in 2008 for stiffer competition. It wasn’t long before he was scouted by Olympique Lyonnais in 2009 and handed his first professional contract a few years later.

Did you know that our boy wasn’t getting enough game time with Lyon? As a result, he went to second-tier AJ Auxerre for a six-month loan spell and ultimately joined Nice in 2014.

It was at Nice that Plea suffered a terrible knee injury that almost ruined his career. The striker parents were with him throughout his ordeal, assuring that all was going to be well. Fortunately, Plea recovered and was back in action.

He had a good post-recovery run of form such that he scored 27 times across the 2016–17 and 2017–18 Ligue 1 seasons before joining Borussia Mönchengladbach on a five-year contract. Plea has secured his place in his new club’s attack by introducing creative input.

Fans would not be quick to forget his hat-trick in Borussia Mönchengladbach’s 6-0 rout of Shakhtar Donetsk.With the hatrick, Plea had his best goals contribution and helped the club secure its largest victory in competition history. The rest as they say is history.

Nicknamed Lasso, the striker is most fans favourite forward. But Who is Alassane Plea outside football? He is an amiable and ever-smiling fellow with a discreet character precedes him.

There are a few things you can see the footballer doing whenever you don’t find him playing football. Activities like tennis, swimming, travelling, ski and basketball are on his list of interests and hobbies. He also loves having fun with friends and family.

Who Is Alassane Plea’s Girlfriend:

Are you looking for Lasso’s girlfriend? So are we! He is already a father, but we don’t know his girlfriend or mother of his child.  If Plea is married, then why is he not showing off his wife? That’s a big pointer that suggests the woman is only his girlfriend. Anyway, time will reveal who she is.

Who Are Alassane Plea’s Parents and Siblings:

The striker’s dad goes by the name Sekou. He is living in France as an immigrant from Mali. Sekou is not an average immigrant, he has established himself as a university lecturer.

On the other hand, the striker’s mom is a French woman. She is kindhearted and widely known for teaching Plea to be charitable. The footballer hasn’t strayed from the quality upbringing she gave him.

On one occasion he noted that his commitment brings me back to the real world. He was apparently speaking of how his commitment to charity made him realise many people in the world are living in poverty.  Plea has no siblings, neither has anyone identified as his brother or sister. Ergo, he must be an only child born to his parents.

The striker has a net worth of about 6.5 million Euros. In 2018 he signed a contract with his Gladbach that will see him earn €60,000 weekly.  That explains why he can afford to live a luxurious lifestyle. Can you see his car below? He must have two more of such fancy cars cooling off in his expensive house.

Thanks for reading this article on Alassane Plea Biography. At Sportliva, we appreciate your comments on your perception of our articles as we strive to revolutionize the bio-space. We believe you now know much about Alassane Plea biography, early life, net worth, family, childhood, personal life, parents, lifestyle and Girlfriend/wife. Alassane Plea biography is not the only article in our bio section. Consider reading Pablo Fornals’ biography.